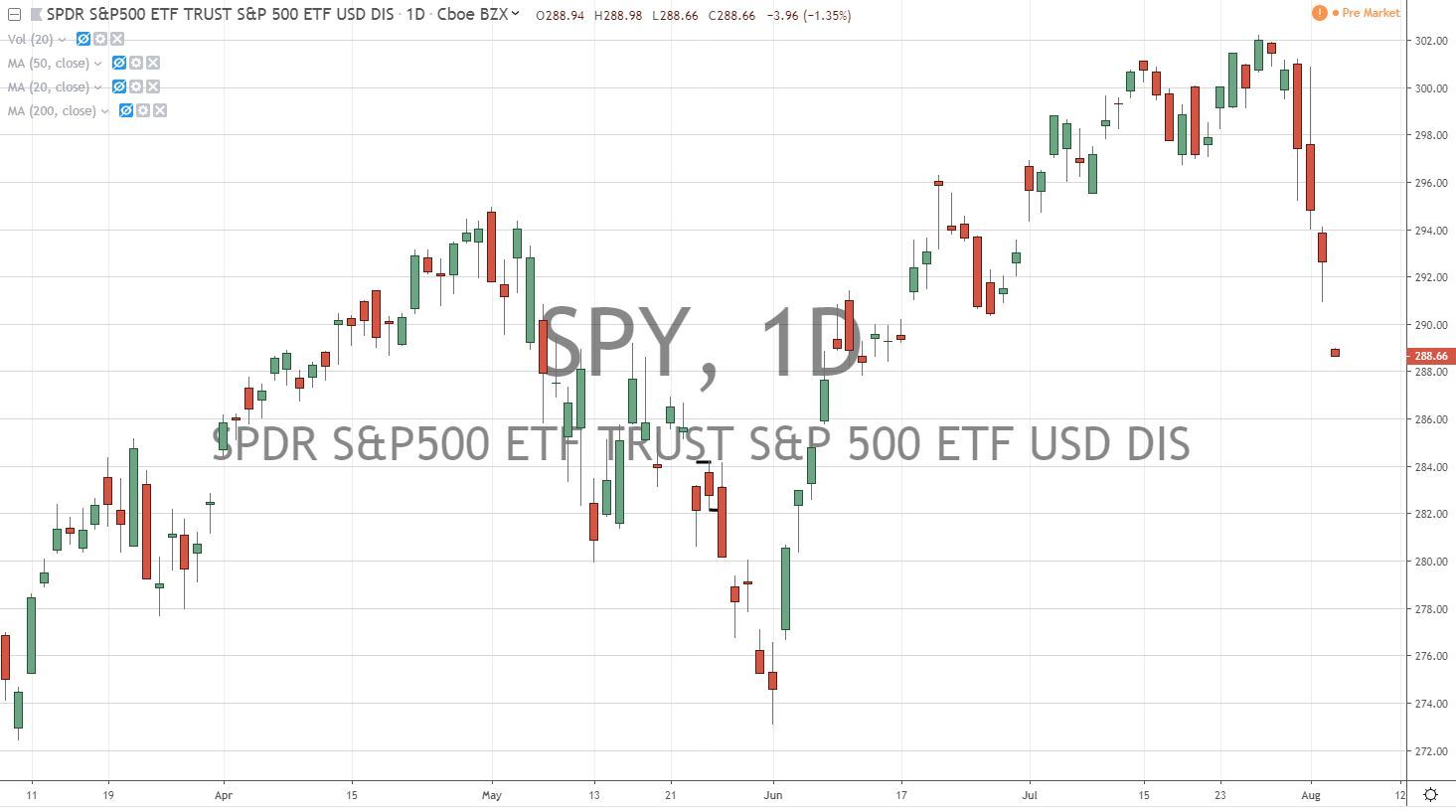 The trend is your friend until the end when it bends...

The market started to collapse and most traders were frozen. They couldn't make a decision. Fortunes were lost in a very short period of time.

The stock market stopped "going up every day..." and people were caught off guard unable to make a rational decision.

The problem is they never said "what if." What if the stock market turns around? What will I do? 401K millionaires who had zero idea how the money accumulated in their accounts were now angry they lost it.

I'm talking about April of 2000. Not August of 2019. Learn from history or we are doomed to repeat. Will the stop market bounce back? Probably. But will that happen before you have too much pain and sell at the bottom? (Like so many did during the crash of 2008?)

Markets were sent on a whirlwind late last week after tensions between Washington and Beijing re-escalated, when U.S. President Donald Trump unexpectedly announced on Thursday that America will be slapping 10% tariffs on another $300 billion worth of Chinese goods starting September 1.

Something is wrong with the global economy. It's not functioning as it “should,” or traditionally has. Actually, the world economy seems downright dysfunctional.

This distortion relative to past norms reminds me of the skewed, tragi-comedic worldview of Garp in John Irving's best-selling 1978 novel “The World According to Garp,” about a man born out of wedlock to a feminist icon.

KLA-Tencor (KLAC) to Post Q4 Earnings: What's in the Cards?

KLA-Tencor Corporation (KLAC) is set to report fourth-quarter fiscal 2019 results on Aug 5. The company topped the Zacks Consensus Estimate in the trailing four quarters, with average of 9.23%.

KLA-Tencor delivered a positive earnings surprise of 10.43% in the last reported quarter. Fiscal third-quarter earnings of $1.80 per share surged 325% year over year.

you are actually a good webmaster. The site loading pace is incredible. It kind of feels that you’re doing any distinctive trick. Furthermore, The contents are masterpiece. you have done a magnificent activity in this matter!

We use cookies on our website to give you the most relevant experience by remembering your preferences and repeat visits. By clicking “Accept”, you consent to the use of ALL the cookies.
Read MoreACCEPTREJECT
Manage consent

This website uses cookies to improve your experience while you navigate through the website. Out of these, the cookies that are categorized as necessary are stored on your browser as they are essential for the working of basic functionalities of the website. We also use third-party cookies that help us analyze and understand how you use this website. These cookies will be stored in your browser only with your consent. You also have the option to opt-out of these cookies. But opting out of some of these cookies may affect your browsing experience.
Necessary Always Enabled

Performance cookies are used to understand and analyze the key performance indexes of the website which helps in delivering a better user experience for the visitors.

Analytical cookies are used to understand how visitors interact with the website. These cookies help provide information on metrics the number of visitors, bounce rate, traffic source, etc.

Advertisement cookies are used to provide visitors with relevant ads and marketing campaigns. These cookies track visitors across websites and collect information to provide customized ads.

Other uncategorized cookies are those that are being analyzed and have not been classified into a category as yet.